Ever since Keith and I got together 7 years ago- one (along with many others!) mutual bucket list adventure we wanted to achieve was attending The Royal Military Tattoo in Edinburgh. 10 years ago I spent an entire summer up in Edinburgh playing in a Fringe Show, and Keith's dousing has lived up here for years and years, yet still we've never been able to make it happen. 7 years ago we made a pact that we would and this year is the year it finally was able to happen!

We dropped Jazz with my mum and Alec and boarded our Virgin East coast train on Friday morning. Unsurprisingly, as not only was the Tattoo starting on Friday but so was the Fringe Festival, the train was packed and quite uncomfortable so we settled ourselves in and watched some catch up on the iPads, and actually before we knew it we were rolling into Edinburgh Waverley Station.

Simon couldn't meet us until after work so we had an hour or so to kill- naturally we headed for the pub, one of our favourites the Ensign Ewitt for the first of many gins, beers and drams! 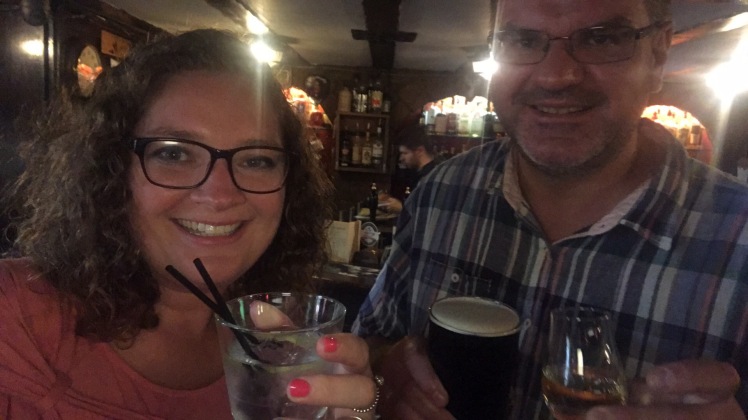 Our very good friend Mark is a sound engineer for the Tattoo and was busy at the castle in his super duper recording van prepping to record that nights show – his job is to record it, edit it and have the official CD on the shelf for Monday's performance. He contacted us and said although he couldn't get away we were welcome to pop up and see his office for the weekend which was exciting, and as always, lovely to see him for ten mins.

It was 4pm and time to meet Simon so we bid Mark a farewell and headed to the Malt Shovel on Cockburn St. The Royal Mile is always a fun place to be at this time of year- lots of people doing publicity for their shows and a really happy, exciting if not slightly nutty vibe all the way! 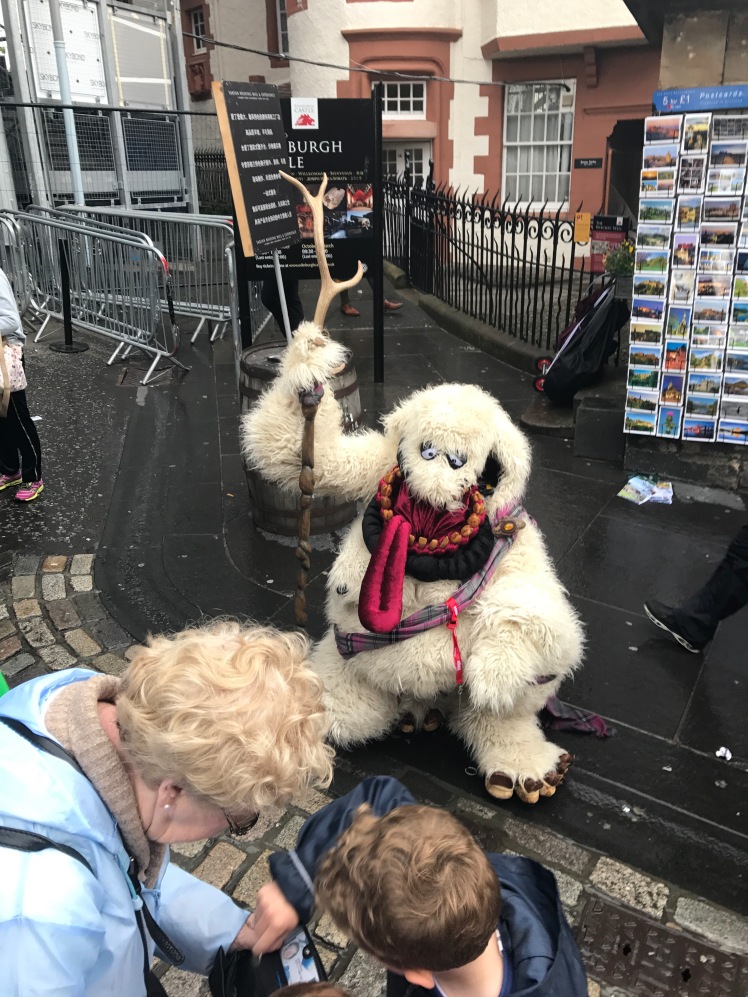 Once we'd met Simon, Friday night followed in a big catch up, naturally involving a few bars and refreshments! Simon once again showed us some really cool places in Leith and we enjoyed our dinner of Shetland Mussels and beef and Haggis burgers at Nobles.

Saturday dawned brighter than the BBC had indicated, despite a few foggy heads in the O'Gorman/Williams clan! 🤣
Nothing a good sausage and haggis roll, super charged espresso, a pork and Haggis scotch egg and a Bloody Mary, or in Keith's case a Bloody Scotsman (replaced vodka with whiskey!!) can't sort out! 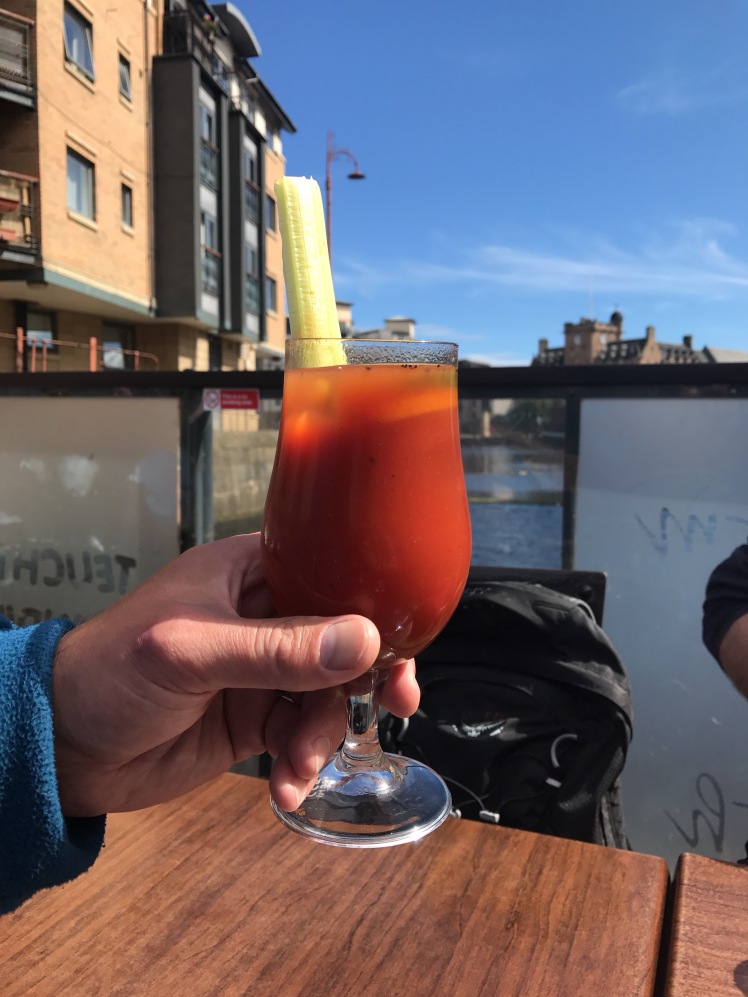 After a lazy morning we took the bus from Leith up to Princes Street where I deposited the boys in John Lewis Gadget section whilst I went off for a shop for an hour. Big mistake- Keith, inspired by Simon's "Smart Flat" has brought a Amazon Echo Dot and subsequently has spent every available minute researching what we can link up to it in our house!
Boys and their toys eh?!

Edinburgh is always such a special place for me, I had a little moment as I dragged myself away from the shops- look at the view from Princes Street- lovely architecture, Arthur's seat- and check out the blue sky!

We opted for lunch at Wagamama's, a treat for me as usually when we go I'm driving- so today I could indulge in my other favourite alcoholic drink, SAKE! KANPAI!

Trying to be sensible (!) we decided to head back to the flat for a nap ready for the excitement of the evening to come.

We made our way back into town 6ish and had a couple of drinks, including one on the mile so we could indulge in some people watching before a delicious curry at Gurkha Restaurant- definitely recommend it there, it's our second visit!

It was now time to head to the castle, I e never seen so many people queuing to get in either! Mark had texted us to make sure we gave ourselves lots of time, he said at the 7:30 showing people were arriving once the show had started. At 9:00 when we were wandering up, we had he previous audience departing and the current audience arriving- so 18000 people and the top end of the mile is rather narrow. Still, the organisation was with military precision, what else would you expect, this is the 68th year! 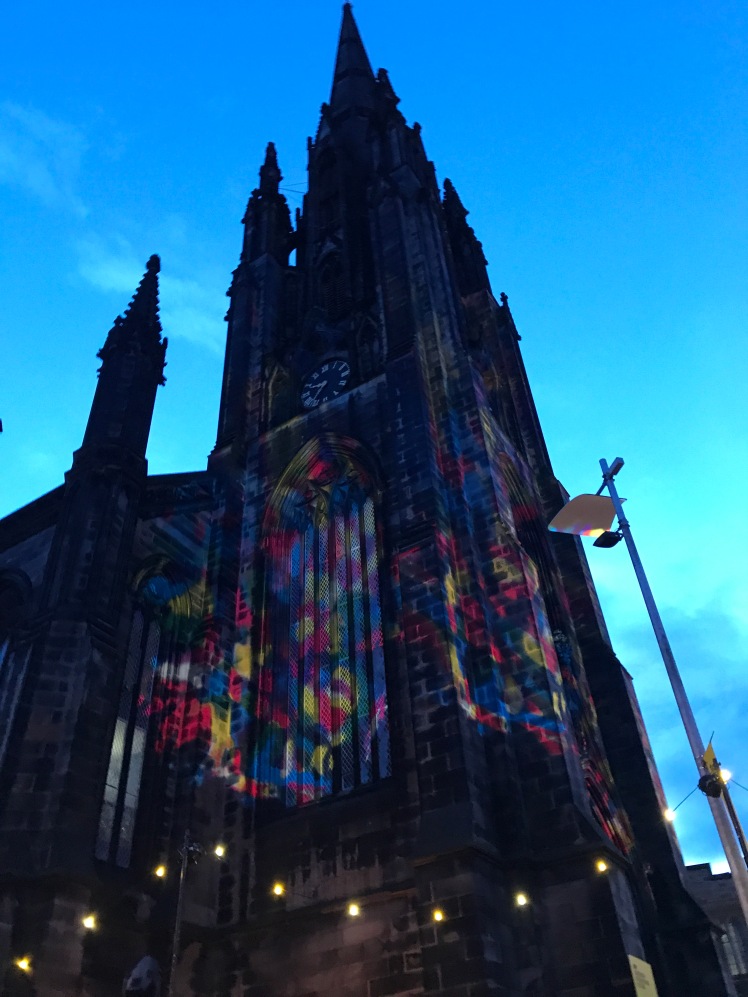 We were in within 20 mins of he doors opening at 9:45- exceptional!

To show was simply SENSATIONAL. Everything that I hoped it would be and a million times more. The special effects and projectors (all 12 of them according to Mark) casting phenomenal images and patterns onto the castle backdrop, the music obviously, the choreography, THE WEATHER!- everything was just awesome. I will never forget our night there!

We walked all the way home to Leith and to took me about an hour to get to sleep- I had so much adrenaline!
Today has dawned sunny again, hurrah! So we will head back into town. Plans are to try and see the Jacobites exhibition and perhaps see some Jazz.

Then back south tomorrow to see Dad and Jenny, pick up Ruby and Jazz and get some adventures going in our campervan!

Until next time
Lx