It was an interesting way to get to the Canyon, although the cheesy cowboy show at the beginning was a bit much for us! Haha. Our group got bumped up to First class which was fab, and the carriages were wonderfully art deco, wood panel lined. Real old fashioned luxury.

I still can’t talk about experiencing the Grand Canyon without getting a tear in my eye. It was the single most amazing place I’ve ever been. Absolutely sensationally awesome. Funnily enough, we didn’t actually see it until about an hour or so after actually arriving, as, because we had booked the flight over the Grand Canyon, we were bundled straight onto a waiting coach and driven to the airport. So our first view was this: 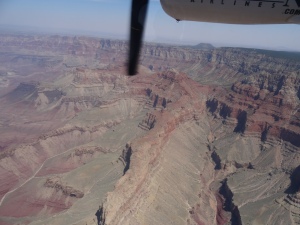 I made a short video of our flight – but I’m aware that nothing I can show you here will ever prepare you for seeing the canyon for real.

We flew on a 19 seater propellor plane – now, I am not a good flyer, and I am so proud of myself for getting on! The funniest thing happened once it took off, Keith and I were sat on the second row back, and I looked round to see EVERYONE looking PETRIFIED. It was the single most terrifying thing I’ve ever done, but in the same breath it was the most wonderful experience I’ce ever had. A funny comment from one of our fellow group members as we landed “I don’t know why they have vomit bags on the seats, I think spare pants would be more appropriate…!” 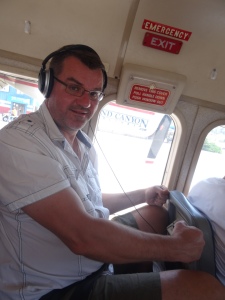 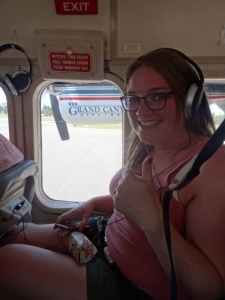 Back on  the ground and with very shaky legs, we caught our coach back to the rim and enjoyed an hour looking over the edge. It really is the most amazing place you will ever visit.

Our journey back to Williams on the Grand Canyon railway was spent trying to make sense of what we had experienced, helped by the train bar, where we spent the entire 2 hour journey, trying all the cocktails on offer!! At one point the train jolted to a stop, and we looked out of the window to see cowboys on horses running next to our train. Next thing we know, these “cowboys” are on the train “robbing us” – all part of the show, very cheesy but a bit of fun!

That night we had some time to kill in Flagstaff before boarding our overnight sleeper train to LA, so we carried on with the beer, enjoyed a nice meal with Arlene and Steve, some friends we had made and then a few sherbets at the Irish Bar across the road from the station. The train ran 3 hours late, so we ended up having a few more than intended! 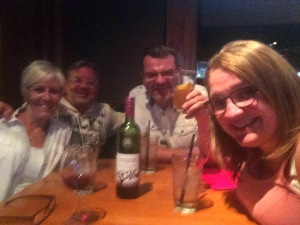 After a very heavy sleep (no idea why…!) our arrival to LA was sadly 3 hours later than planned, which resulted in us having less time in LA. We managed to get a whistlestop tour in, with lively guide Kenny. we saw The Dolby Theatre, home to The Oscars, but couldn’t get in die to them setting up a premiere for that night. We saw Hollywood Boulevard and also some of the stars on the sidewalk. We also saw a naked man on a street corner (our guide just said, welcome to California!) and we took a drive through Beverly Hills and Rodeo Drive. 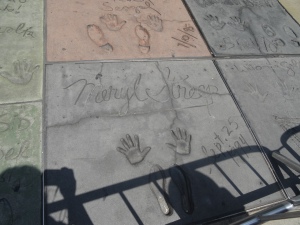 Our first sight of our room for the night, The legendary Queen Mary, was exciting. The Queen Mary was built as a luxury ocean liner and for many years held the title for fastest crossing from England to New York. It was so fast that come WW2, it was used as a troop ship to cart Americans to the war, and was so fast that the German U Boats couldn’t catch it to attack it. We were so lucky to be spending the night on this marvellous ship. They’ve left on board exactly as it would have been so it was lined with rich wooden walls, luxurious suites, and marble flooring. It was fabulous. We enjoyed our hour tour of the boat and afterwards went down into the engine rooms to look at one of the propellors. All the fixtures and fittings were original in the rooms, although they had added a flat screen tv for guests! We enjoyed cocktails in the first class lounge at the front of the boat before having dinner looking out across to Long beach. Perfect 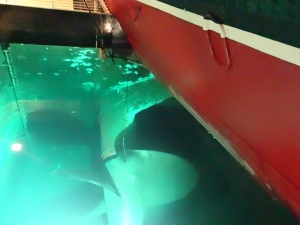 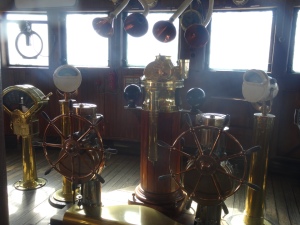 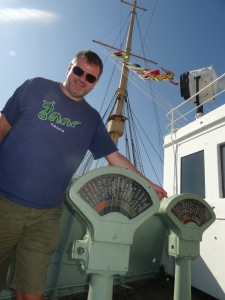 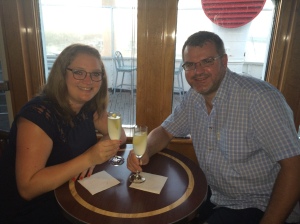