Monday began with an early alarm as we were due to depart Beijing at 09:43, on train number G655, our first bullet train of this trip. 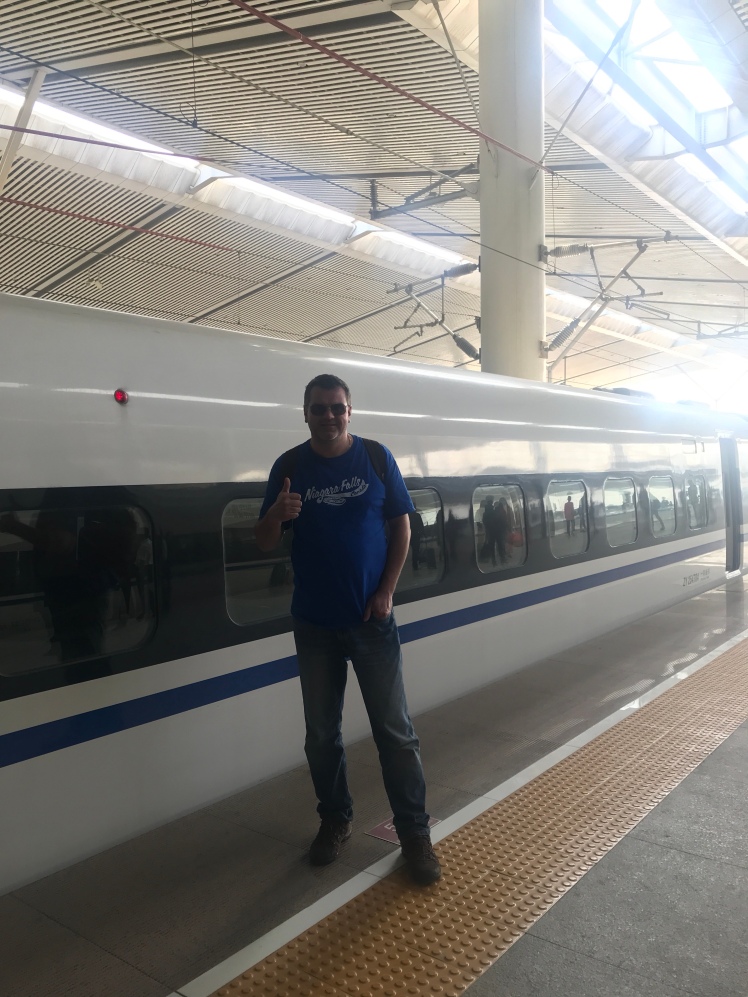 Lily escorted us all the way to the train carriage where we waved goodbye with huge thanks. Our journey was 6 hours long as we travelled over 700 miles to our next stop, Xi’an. The train sat mainly at around 300kmph! As with the Japanese bullet trains, the ride was so smooth, it was hard to believe that we were travelling similar speeds to a formula one car!

We arrived in Xi’an, which was considerably warmer than Beijing, and met Jason, our new local guide. On route to the hotel we stopped off for a wander down the Muslim area of the city, including the Grand Bazaar which was full of street food sellers, and stalls selling trinkets and paper cuttings etc and also the Grand Mosque.

Around 6pm we arrived at our hotel for the next couple of nights, the Grand Mercure. That evening we had some free time to do our own thing. Mary and Jason offered to take anyone who fancied it out to a local restaurant for a meal. Initially we thought we’d do our own thing, but then we changed our minds, as we thought Jason being local would be an advantage as he’d know some great places to eat. We made the right choice- our meal was superb and an absolute bargain at only £10 each including beer!!

Tuesday arrived and with it came a slight lay in! Today was another exciting day- we were off to see the Terracotta Warriors. On arrival we were shown into Pit 1, home to the largest and best preserved collection of warriors. 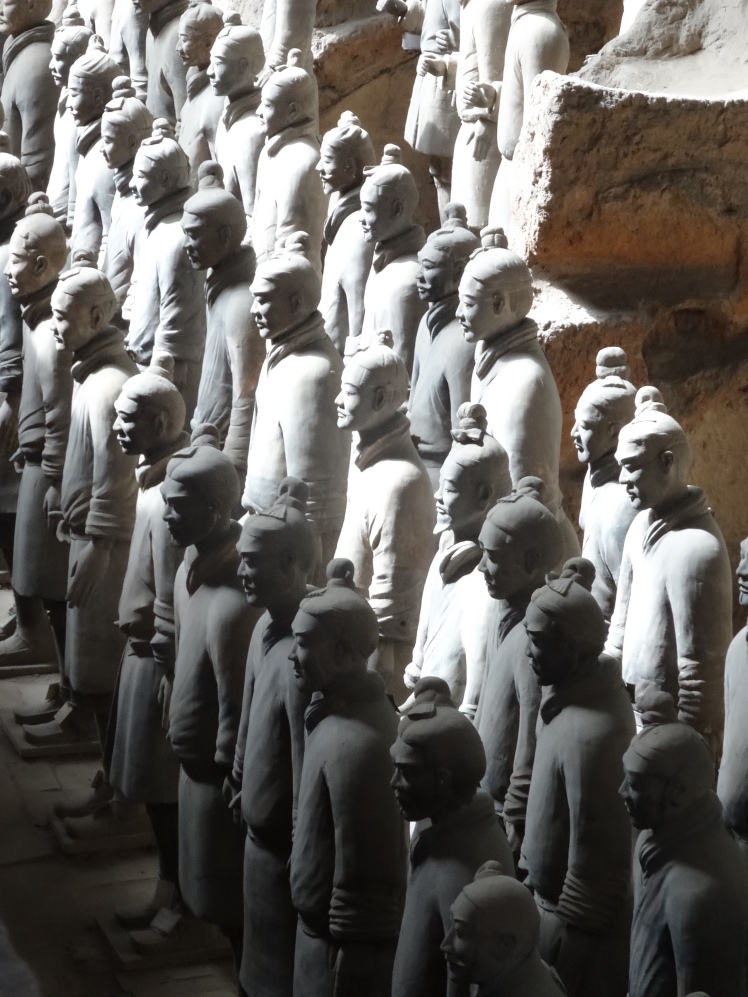 It was absolutely breathtaking; to think that these life sized Terracotta figures have been hidden underground for over 2000 years is just mind boggling! They really are beautiful. The detail on each and every one is different but highly detailed. 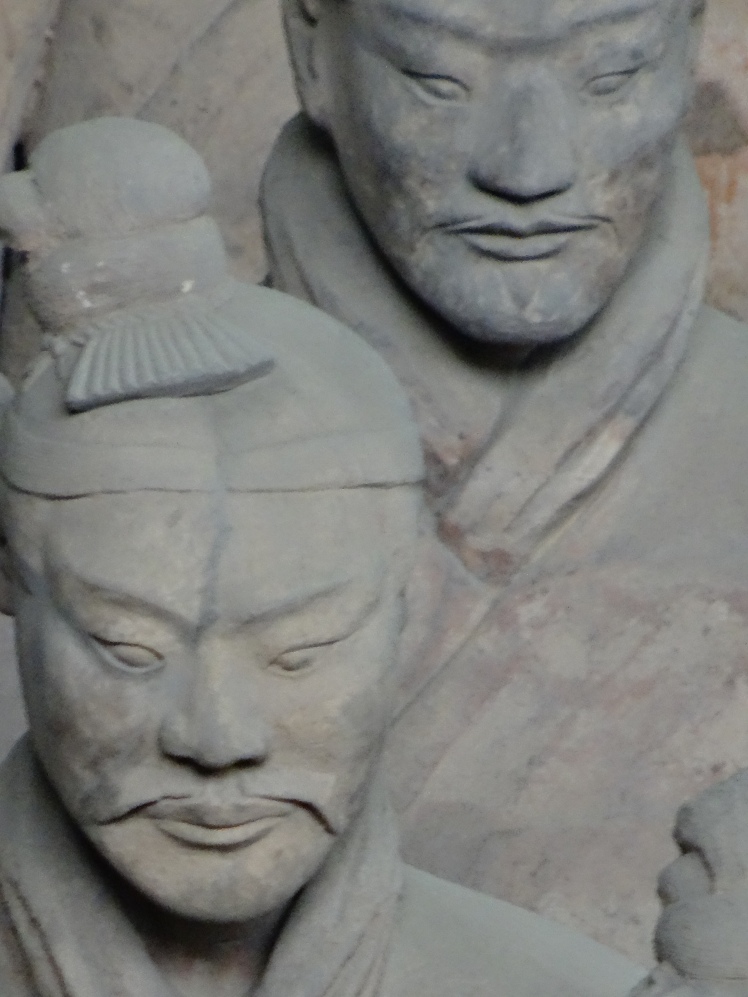 We were given free time to take it all in at our own pace before meeting up for coffee. We then went onto pits 2,3,4 which were home to the surviving chariots and the kneeling archer which was my particular favourite.

The kneeling archer even had original paintwork still visible along with tiny details on the sole of his shoe and hair braiding. Simply amazing. 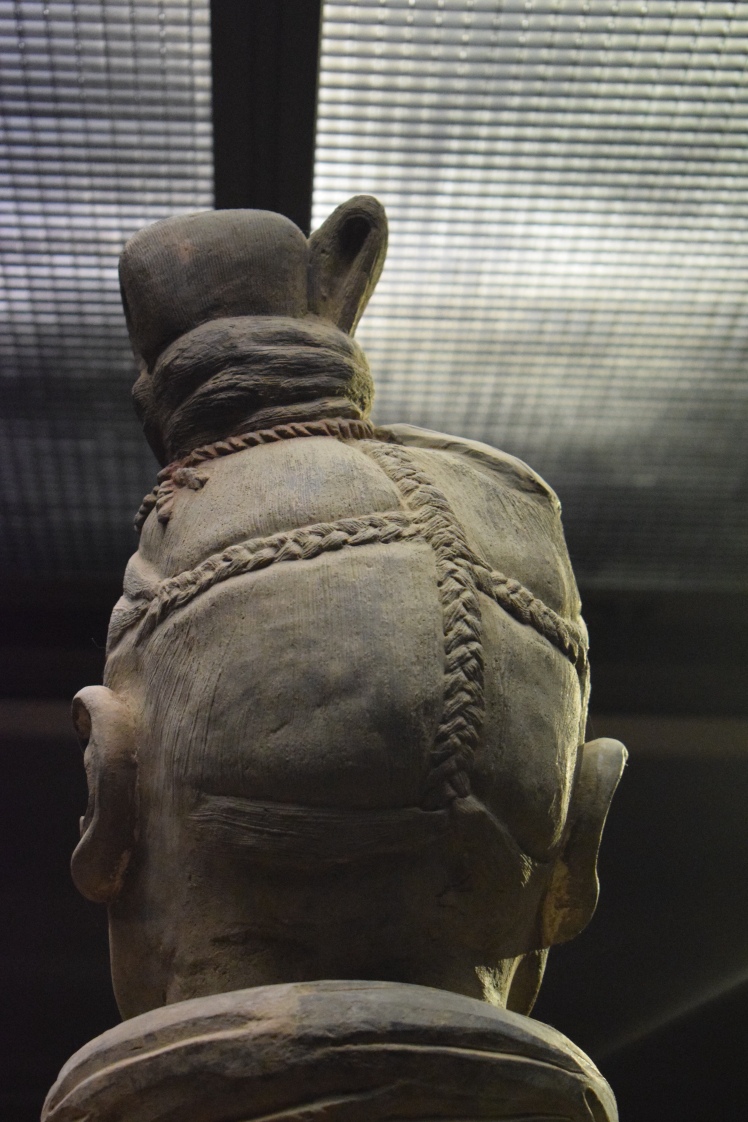 After lunch at the museum we returned to the coach and made our way back to Xi’an. I had read about the possibility of cycling around the city walls of Xi’an and mentioned it to Jason, who very kindly arranged for the coach to not only drop Keith and I, but also a small group of our traveling companions at the walls and he accompanied us which we thought was very generous. 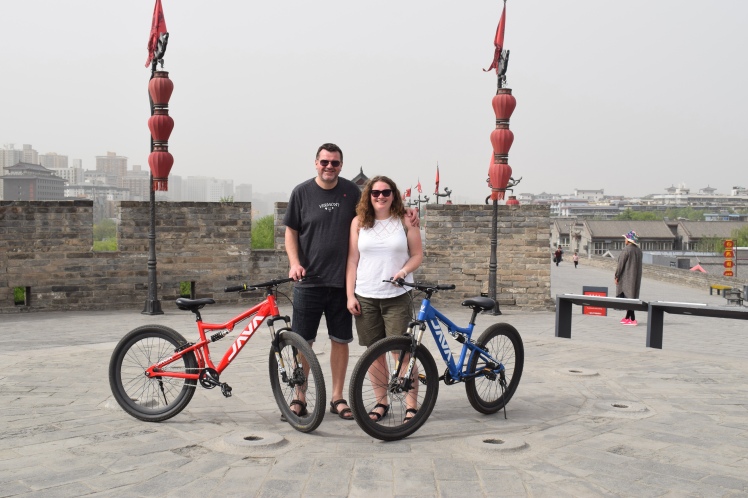 We all really enjoyed the 8.6 mile bike ride. Xi’an city walls are the largest and best preserved City walls in China. They are also extremely well preserved and rather wide, so cycling was absolutely fab! Jason met us after our circuit and escorted us back to the hotel on the public bus which was another great experience! 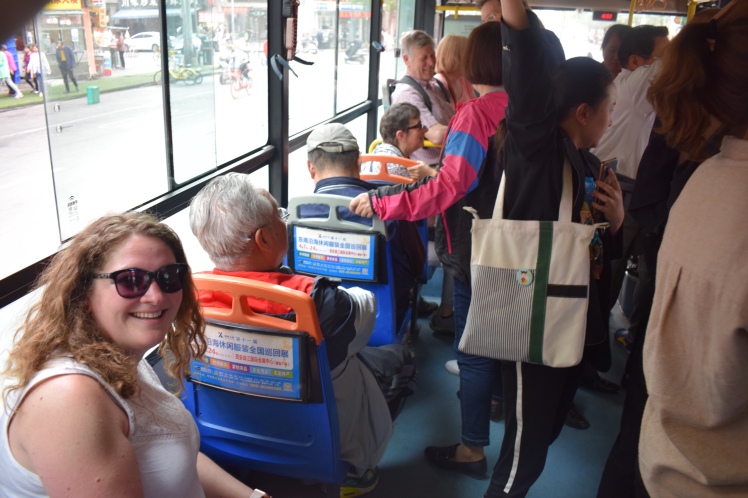 We had a very quick turnaround at the hotel- just enough time to get showered and changed, before we headed out as a group for a Dumpling Banquet. Wow- this was INCREDIBLE! One of the most unusual dining experiences we’ve had- 16 courses of delicious dumplings! All mouth watering and unique in flavour.

After dinner, Jason had organised a trip to the theatre to see some traditional music and dancing from the Tang Dynasty. 18 of our group attended and we had a FANTASTIC night! If you are ever in this neck of the woods you need to come to this! 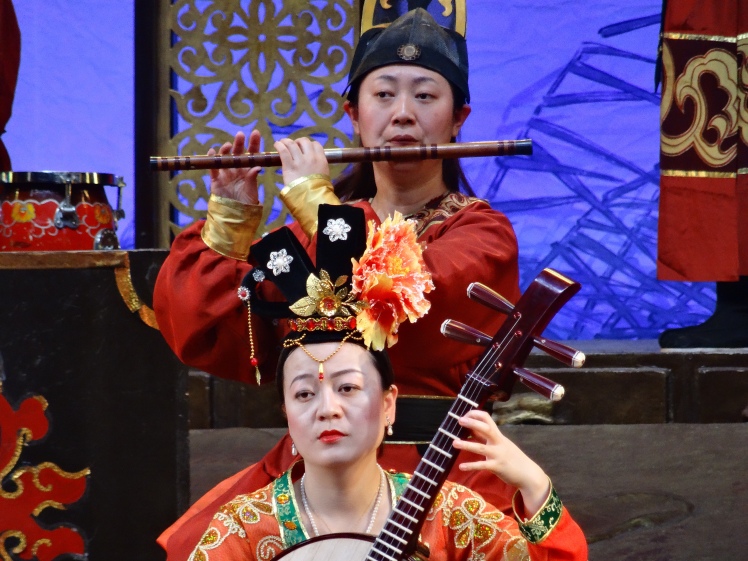 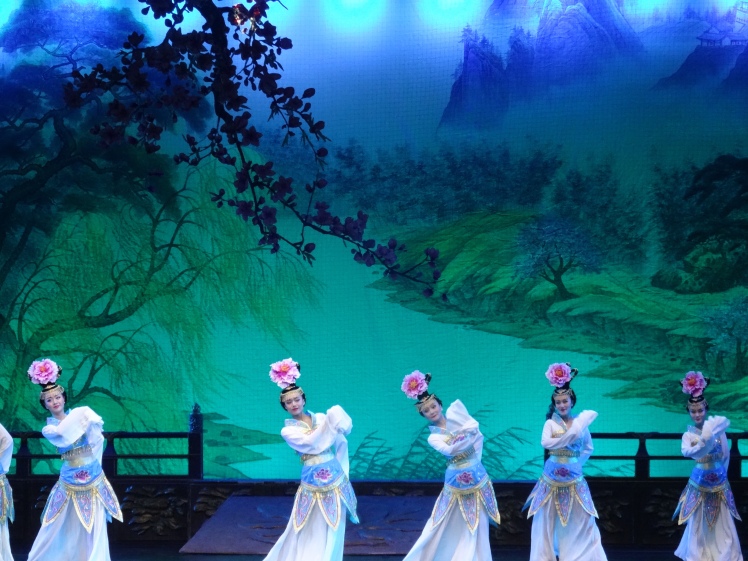 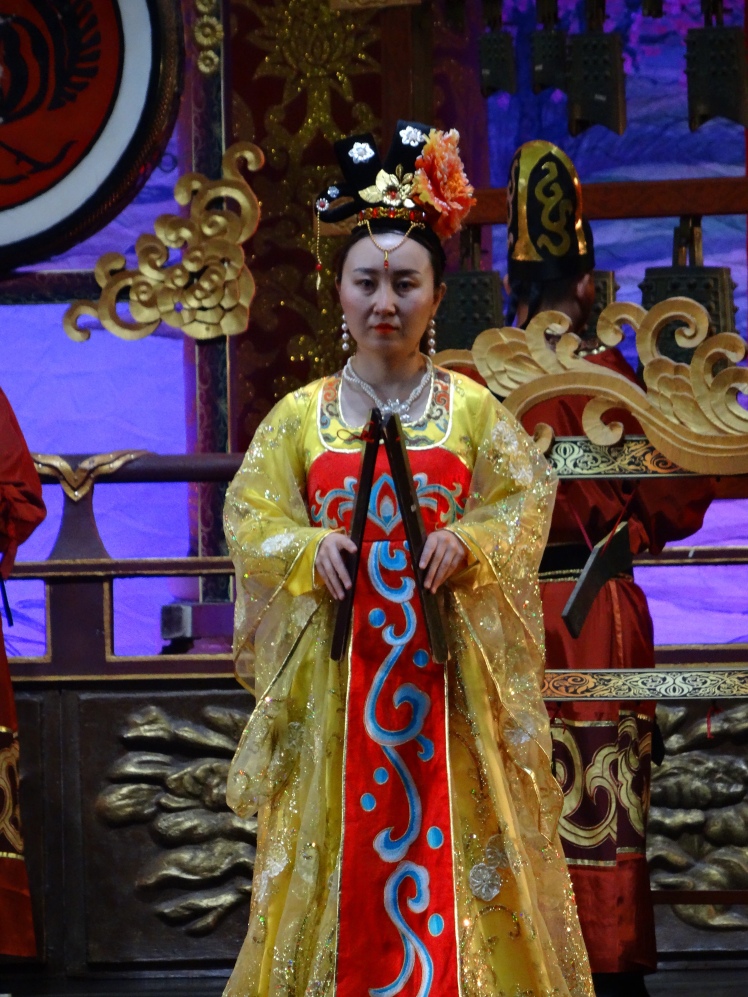 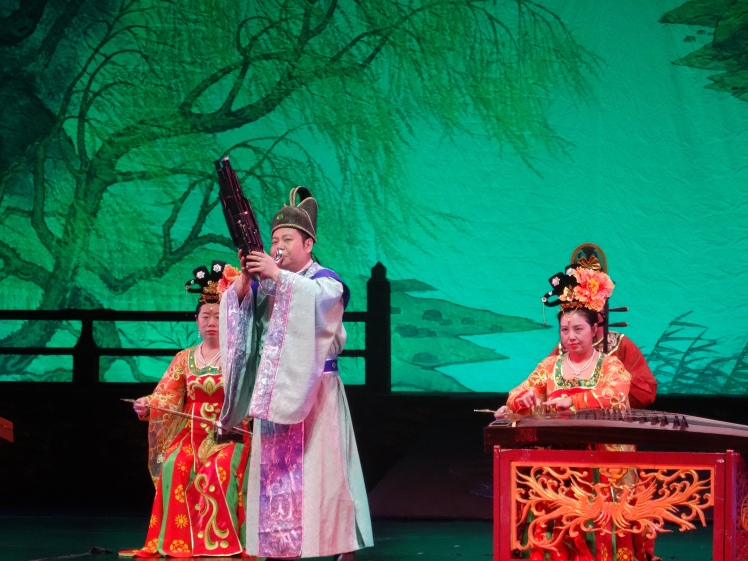 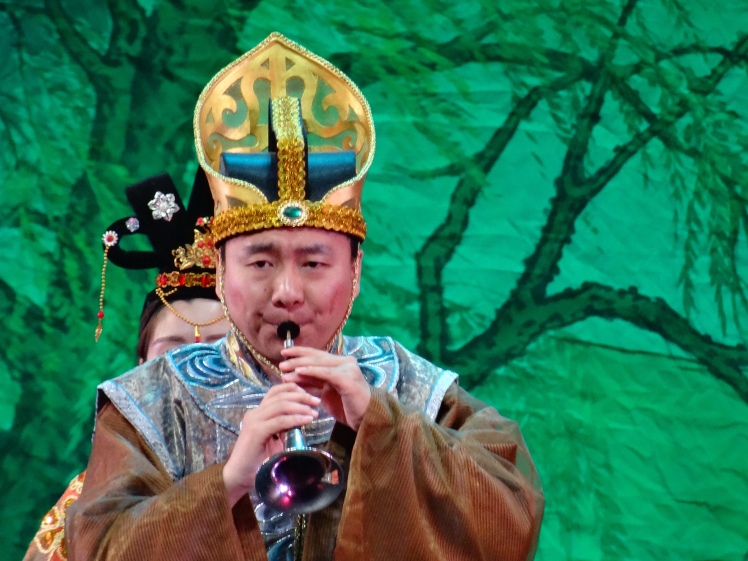 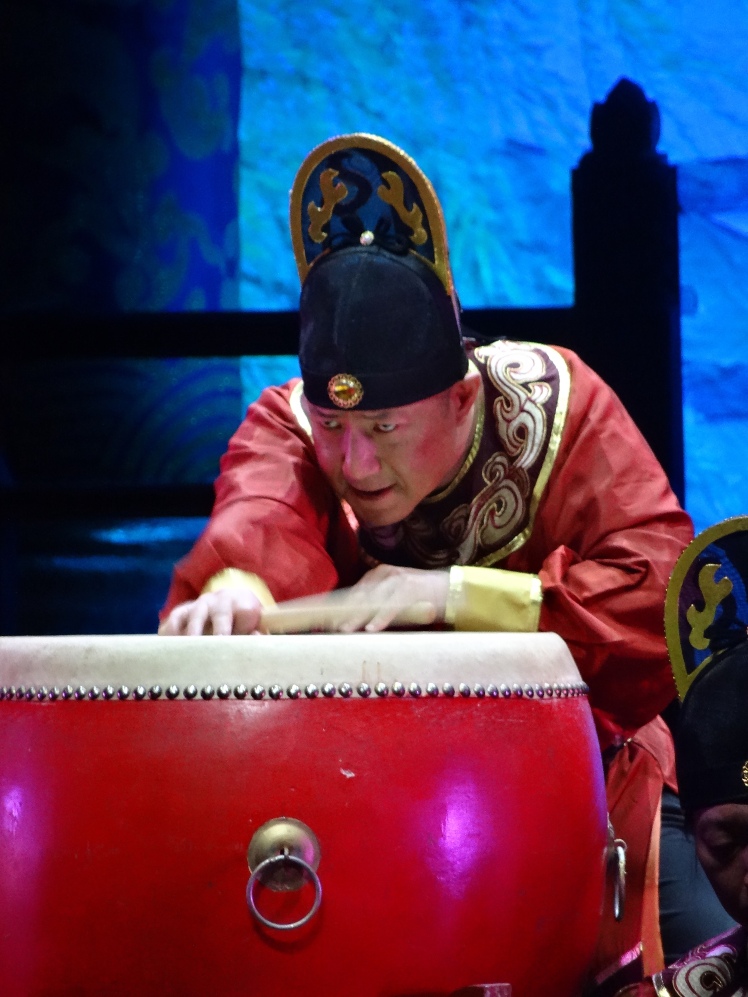 As musicians, Keith and I particularly found the traditional musical instruments especially interesting, but the dancing, costumes, scenery were just so enjoyable to see and such high quality it really was a wonderful evening and a fitting end to our short but highly enjoyable time in Xi’an.

Another day and another early start- today we were saying a very sad farewell to Jason and Xi’an. The morning was spent visiting a number of places, including a Jade factory where I brought a lovely Jade pendant – something I’ve been after for a while given that my middle name is Jade. We also visited the Wild Goose Pagoda which was 1300 years old and set in some lovely picturesque gardens. 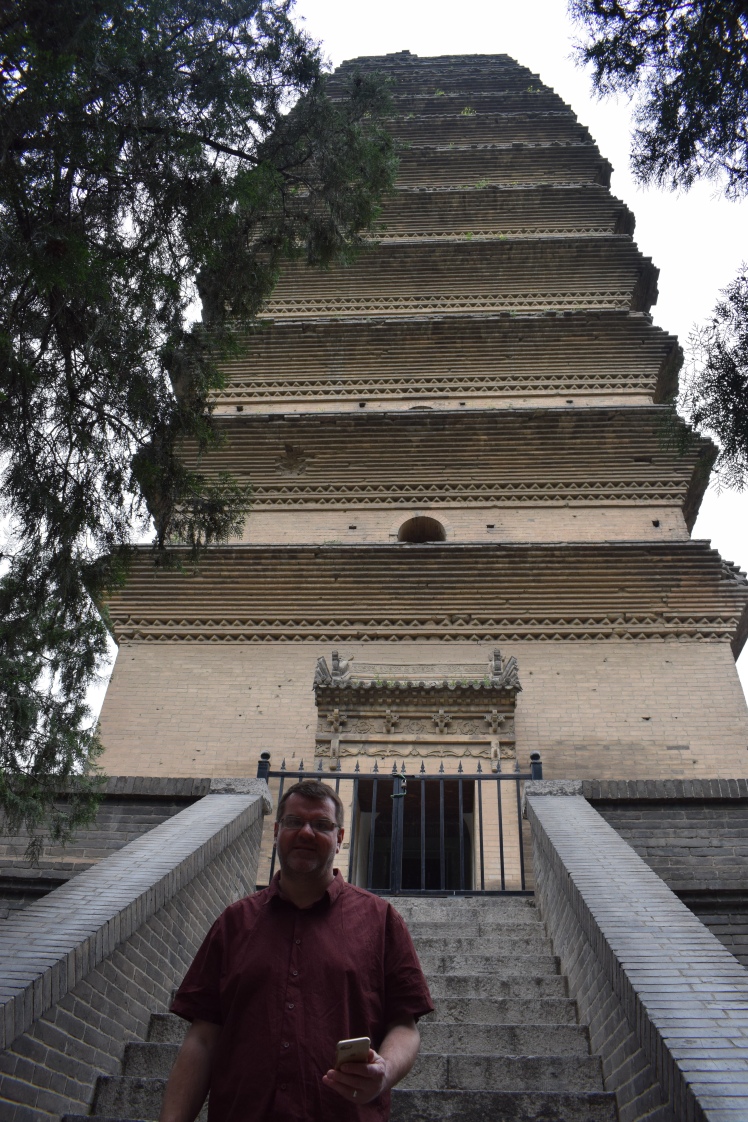 Jason had organised for us to take a Chinese calligraphy class here which was amazing – we learnt how to write happiness and the UK.

Keith and I are finding the Chinese characters fascinating- each one is more of a phrase or collection of syllables rather than each symbol being a word as such. We are starting to recognise certain symbols here and there.

We also brought a couple of paintings by a local artist here which we had our names written in Chinese on.

Next stop was lunch, which was a buffet in a theatre- it was amazing – so delicious! Needless to say we ate and drank so much that we slept on the train journey from Xi’an to Chengdu.

Our train journey was a first for GRJ groups – we were lucky enough to be travelling on a new high speed service which has only opened in the last few months. The 4 hour trip replaced a 1.5 hour flight or a 16 hour overnight train service. Much of the journey was in tunnels through the mountains etc but as always, it was an enjoyable relaxing trip.

On arrival we were met by our new guide, May. She took us for dinner at a local Sichuan restaurant which included a bit of dancing and fire eating (not by us might I add!)

To be honest we would have rather not had a meal and gone straight to the hotel to freshen up – it had been a long day of travel, and lunch was so huge! Having said that though the food was nice and a good opportunity to try Sichuan chillis – which were rather hot!!!

An early- ish night followed in our new hotel, The Tibet Hotel, Chengdu.